A visit at nature’s pace... Traveling at nature’s pace is not only looking for direct contact with nature and drawing on local tradition and culture, slowly wandering away from the hustle and bustle and crowds, but also a constant search for new, undiscovered areas and attractions. In Małopolska, there are many unique places, not overcrowded with tourists on a daily basis, and instead are full of charm and unique character.

North of Krakow, in the Miechów Upland, near Racławice, spread the Racławice Fields, where a famous battle took place on 4 April 1794; it was then depicted in the famous Panorama, painted under the direction of Wojciech Kossak and Jan Styka. It was here that insurgent troops led by Tadeusz Kościuszko clashed with the Russian army under the command of General Alexander Tormasov. This fantastic place will arouse interest of lovers of history and relics of the past, but also of people looking to relax in the beautiful natural surroundings. It is worth starting the walk in the village of Janowiczki at the foot of the Zamczysko Hill and the Kościuszko Mound, which is slightly over 13 metres, making it a little lower than the one in Krakow. There is a mini park nearby, where you can spend time with children and family: light a campfire, grill, or take shelter in a gazebo in case of rain. On the Zamczysko Hill, there is also a fortified residence which, according to archaeologists, was built in the first half of the 14th century. It is, however, only a dry moat that has survived to this day, along with legends, e.g., one of an underground corridor connecting it with the church in Wrocimowice or the nearby Racławice. From the hill opens a picturesque panorama of the Racławice area. At the foot of the hill, a children’s fitness track is waiting for active and adventurous kids. When the youngest are having a great time, the adults can rest for a while listening to the soothing noise of the Racławka Stream. An interesting attraction will also be the manor house in Janowiczki surrounded with a park, where you can find a chapel and the graves of the scythemen who died on the battlefield. Next to it is the villa which belonged to Walery Sławek, a statesman, parliamentarian and prime minister of the government in interwar Poland. Another obligatory point in the area is the memorial of Bartosz Głowacki, a peasant hero from Racławice. The trip can be extended a bit with a visit to the graves of scythemen in the nearby Dziemięrzyce. Here, you can find the cross depicted in the Panorama of Racławice: it stands at the crossroads on the Dziemięrzyce Hill. In Racławice itself, it is worthwhile to visit the church of St Peter and Paul the Apostles, where the church bell, cast in 1776, tolled to warn against the approaching Russian troops. 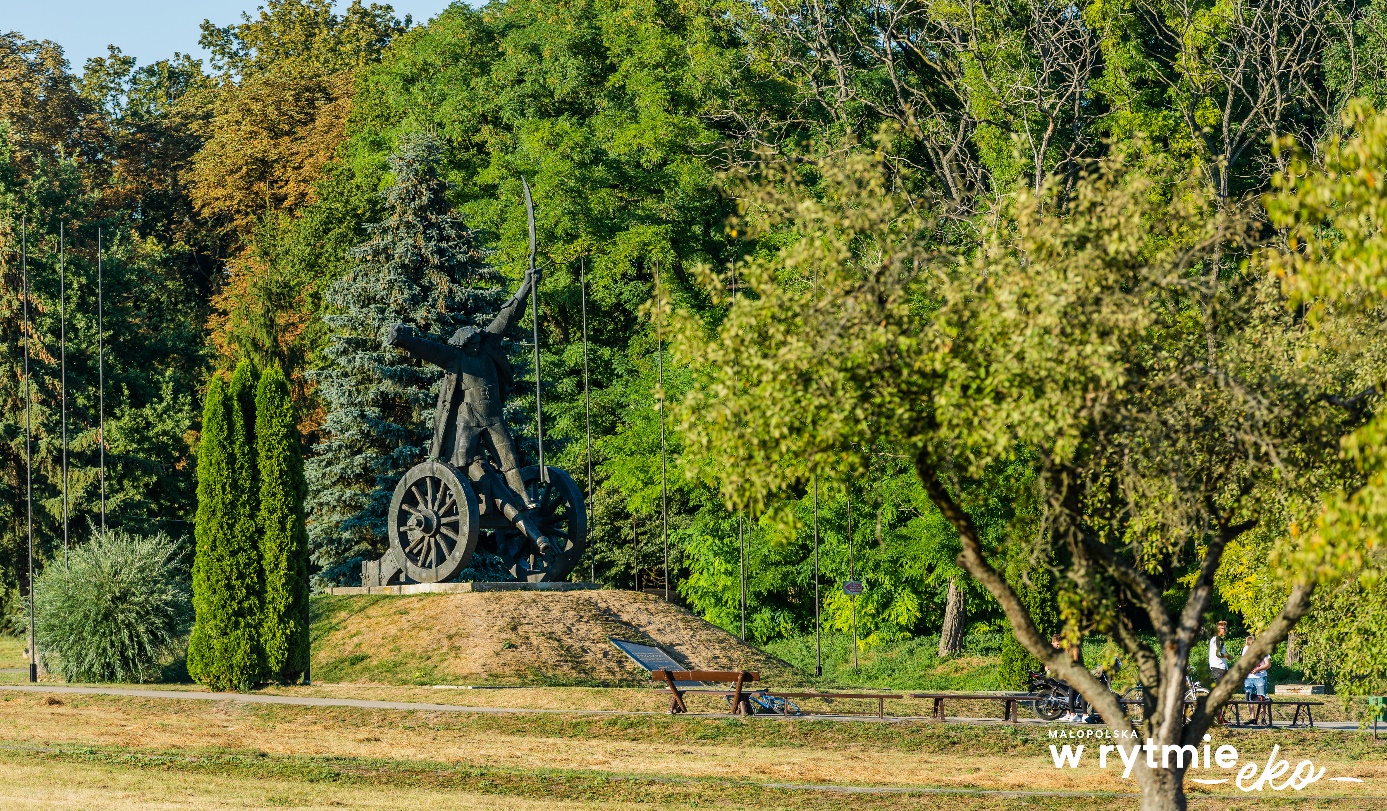 When travelling from Kraków towards Tarnów, it is a good idea to stop in Brzesko. This historic city, famous in the whole of Poland for its brewing traditions, will enchant you with its picturesque and atmospheric Market Square. The town was founded by the Melsztyński family in 1385 under the Madgeburg law. Its medieval urban layout with a square-shaped market and the Gothic St James church from 1447 have been preserved to this day. The tourists’ eyes will be delighted with stylish tenement houses with decorations and colourful façades. In the middle of the Market Square stands a baroque statue of St Florian from 1731, one of the oldest of its kind in the region. It looks especially attractive in the evening, highlighted by illumination. The whole market shows an entirely different, romantic side after dark. Near the Okocim Brewery in Brzesko, it is worth visiting a park founded in the 19th century by Jan Albin Goetz and his wife, Countess Zofia née Sumińska. On hot summer days, we can easily find shade here, thanks to the 43 tree and 12 shrub species, including exotic ones rarely found in our latitude, occupying the area of 40 hectares. In the heart of the park, there is a neo-baroque, ornate Goetz Palace built in the Viennese style, a great background for holiday pictures. There is no shortage of attractions for ethno-fans in Małopolska. Museums and open-air museums attract visitors with interesting collections of original items and reconstructions. However, there are places, often intimate, situated far from the main routes, where you can feel the real atmosphere of the surroundings, and learn about local customs and traditions. Such a unique ethno-attraction is undoubtedly the J. Żak PTTK Open-Air Museum (Skansen PTTK im. J. Żaka) in Zawoja Markowa at Markowa Rola. You simply cannot miss it when visiting the area of Babia Góra. This very charming corner located in the Babia Góra National Park presents the traditional buildings of the Babia Góra Highlanders who lived in the villages of the Skawica valley on the northern side of Babia Góra, making a living on pastoralism, agriculture, forestry and wood crafts. The open-air museum consists of three wooden cottages, a forge, a granary with a cellar and a chapel from the early 20th century. In the oldest house, Franciszek Stopiak’s chimneyless hut from 1802-15 built of spruce and fir logs, we will see an ethnographic exhibition showing the typical interior of an old house as well as an exhibition of religious paintings. Located at the highest point of the clearing, Franciszek Kudzia’s cottage from 1900 stood there originally. Today, it houses an exhibition devoted to the history of Babia Góra tourism. In the future, the old shelter from Markowe Szczawiny is also planned to be reconstructed here. It is a real place with soul and character, which has to be marked as a must-see on the map. A walk to the castle hill located in the Lipowiec Nature Reserve will certainly bring you a huge dose of aesthetic sensations. The medieval Lipowiec Castle with a high tower, offering a beautiful panorama of the surroundings, guarded the old trade routes from Krakow to Silesia. The Lipowiec Nature Reserve itself is the habitat of birds including black woodpeckers, kestrels and swifts. The beech forest is full of rare plant species: you may recognise some, for example: the hazelwort, the unspotted lungwort, the corydalis, the red helleborine, small-leaved helleborine, yellow star-of-Bethlehem. In early spring, walkers will be delighted with the carpets of wood anemones! On the way back from the castle hill, it is necessary to reserve time to visit the Vistula Ethnographic Park (Nadwiślański Park Etnograficzny): an extraordinary open-air museum devoted to the culture of Western Cracovians. Today, we will see here 25 wooden structures and numerous examples of small rural architecture: stand-alone chapels, bee yards and wells, harmoniously integrated into the surrounding nature. Cottages and farm buildings – a granary, an oil press, a forge, a grain mill, barns – can be seen here up close. The wooden church in the Gothic style from 1623, brought here from Ryczów, deserves our special attention. Another building moved here is the manor house from Droginia from 1730, currently presenting the life of an 18th- and 19th-century wealthy noble family. When discovering the Sądecki Region and the Low Beskids, it is worthwhile to follow the trail of displaced Lemko villages. Before the Second World War, it was quite a densely populated area, most of its inhabitants being people of Ruthenian origin, called the Lemkos. The Lemkos’ occupations included agriculture, breeding, stonework and manufacturing of wood accessories. The villages were deserted after the war during the ‘Wisła’ pacification action, carried out by the authorities of the Polish People’s Republic in 1947, when over thirty thousand people were displaced from the Lemko region alone. Only traces of old villages have remained: chapels and crosses, feral fruit which have gone wild, piles of stones, sometimes stone foundations of houses or empty spaces where Orthodox churches stood. Today, as a reminder of the former inhabitants, unusual information boards were erected: symbolic doors standing alone in the meadow, which are to remind people of the past of these lands and commemorate the villages. We will see them in places including Czarne, Lipna, Radocyna, and Długie. It is best to explore the area by bike, along the route leading through Gładyszów, Krzywa, Jasionka, Czarne, Radocyna, Lipna, Zdynia, and back to Gładyszów. The area is a place of the yearly ‘Lemko Watchfire’, an event where Lemkos from all over the world come together to celebrate together for several days. 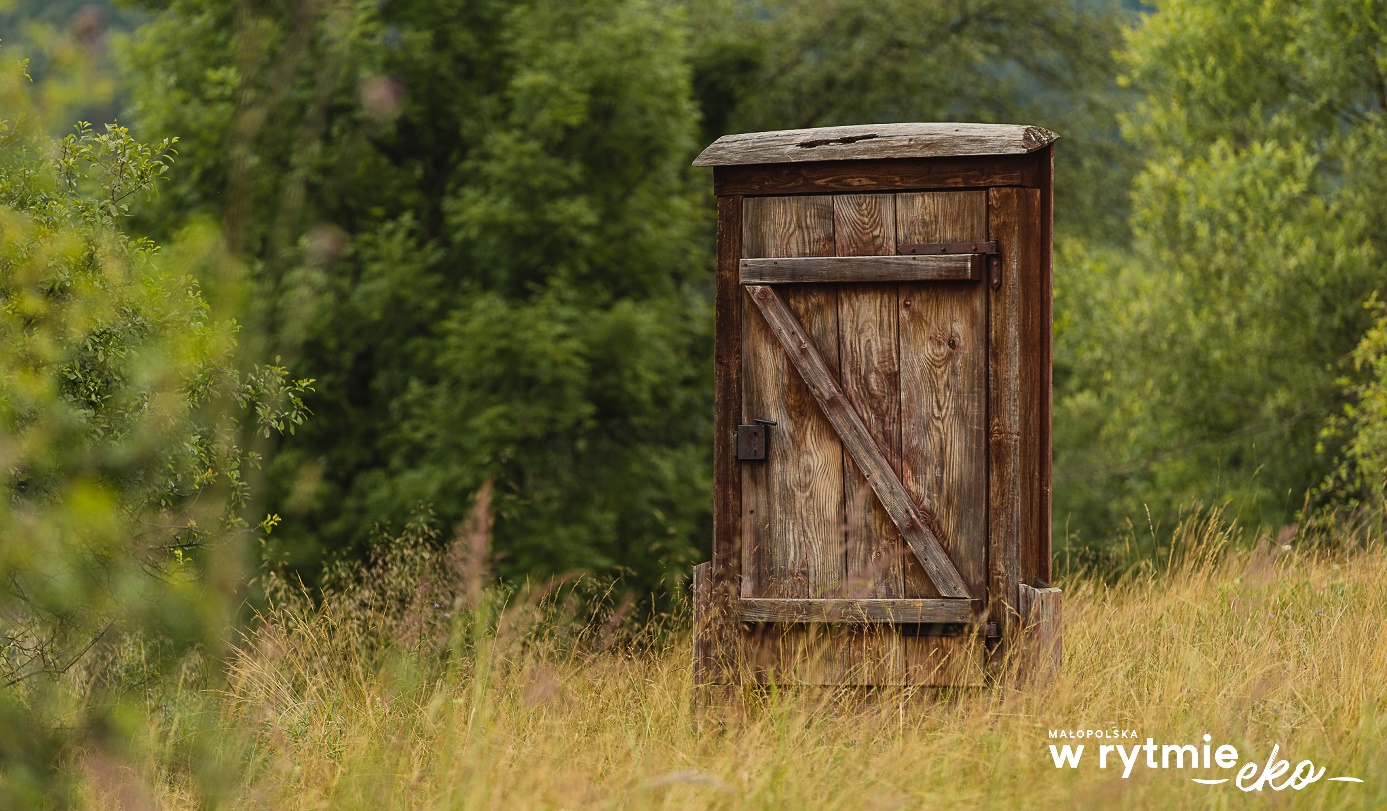 Małopolska has a lot to offer; look around, carefully plan your route, and unusual and unknown places worth discovering are sure to turn up. Let us open our eyes wide and observe carefully what surrounds us to see all the faces of the surrounding reality, including the hidden ones. If you need inspiration, make sure to check our eco-guides at visitmalopolska.pl/w-rytmie-eko .