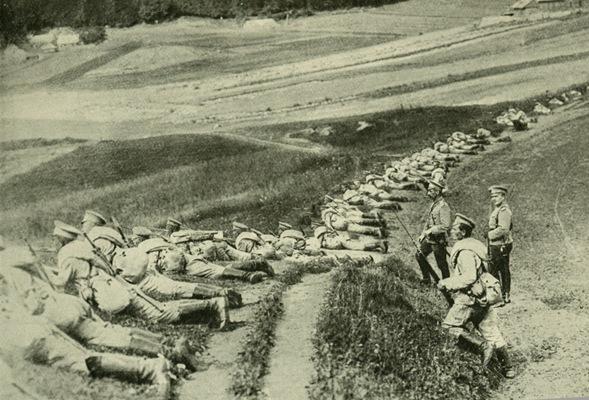 In the early December of 1914, an over 60-km wide gap was formed between the Russian army units, and the Austro-Hungarian reserves entered the gap on December 3, 1914. The units concentrated in the region of Chabówka, Mszana Dolna and Dobra began to encircle the Russian wing, heading toward Rajbrot. However, the manoeuver was noticed and the Russians began to prepare the defence so efficiently that it was only on December 7 that they were driven out beyond the Stradomka River. Meanwhile, on December 6, 1914, the Eighth Russian Corps attacked the Austro-Hungarian forces south of Rajbrot. This attack led to a situation in which each side attempted to break through the enemy right wing: the Austrians charged in the direction of Bochnia, the Russians – in the direction of Limanowa and Mszana Dolna. The battles for Jabłoniec Hill above Limanowa fought on December 11, 1914, became legendary. However, when the tsarist forces reached Nowy Sącz, the Russian army was threatened by being cut off from the communication lines. So the outcome of the battle was basically decided. As a result, the Russians not only had to give up advancing to the west, but they also began to slightly retreat. Both sides suffered heavy losses in the battle and could not supplement them for a long time.
Author: Comarch