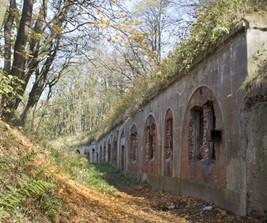 It was erected in the years 1882–1886 as a typical artillery fort on the site of the earlier earth semi-permanent embankments, dating from the 1870s.
Its main task was protecting the so-called Lemberg Route, that is, the road leading toward Lemberg. The enemy approaching from the east would be met with the fire of five batteries of fort cannons, supported by the artillery battery. The entrance to the front was protected by the armoured bay with two machine guns placed on the gun carriages. The fort actively participated in the fights against the Russians in December of 1914, since the Russian offensive took place along the axis of the Lemberg Route. Prokocim Fort was crucial for the defence of the entire fortress, since the next fort toward the north, Lasówka nad Wisłą Fort, was located almost 3 km away. The Austrian counterattack of December 6, supported by the fortress crew, set off from there and eventually drove the Russians out from the forefront of the fortress to Wieliczka. At present, the building is not in use.
Multimedia 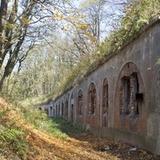