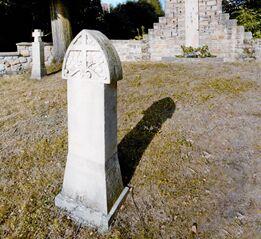 The necropolis designed by Jan Szczepkowski is one of the most interesting architecturally Galician cemeteries dating from the First World War.
It was established on the steep slope in the shape of a trapezium. The graves are located on several terraces cut out in the slope. The cemetery is surrounded by a wall on three sides, and enclosed at the back with a taller wall of a chapel character. The lower corners near the road feature bulgy cylindrical pseudo towers, topped with shingled roofs. The cemetery is the place of eternal rest for 87 fallen soldiers from the Austro-Hungarian and German armies. In the spring of 1915 the front ran in the vicinity of Bogoniowice on the line of the hill in the east side of the Biała River Valley, above the village of Tursko. This is where the Prussian Guarde du Corps units of the 11th Army commanded by General Mackensen attacked the Russian positions on May 2, 1915, that is, on the first day of the Battle of Gorlice. Thanks to the excellent artillery preparation, the First Division of Guarde du Corps Infantry fighting above Tursko managed to conquer the Russian lines on Hill 358 within mere 15 minutes.
Multimedia 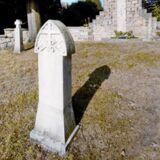